Welcome to today’s stop on the blog tour for The Rogue Not Taken by Sarah MacLean!

When Sophie, the least interesting of the Talbot sisters, lands her philandering brother-in-law backside-first in a goldfish pond in front of all society, she becomes the target of very public aristocratic scorn. Her only choice is to flee London, vowing to start a new life far from the aristocracy. Unfortunately, the carriage in which she stows away isn’t saving her from ruin . . . it’s filled with it.

Kingscote, “King,” the Marquess of Eversley, has never met a woman he couldn’t charm, resulting in a reputation far worse than the truth, a general sense that he’s more pretty face than proper gentleman, and an irate summons home to the Scottish border. When King discovers stowaway Sophie, however, the journey becomes anything but boring.

He thinks she’s trying to trick him into marriage. She wouldn’t have him if he were the last man on earth. But carriages bring close quarters, dark secrets, and unbearable temptation, making opposites altogether too attractive . . .

Sarah MacLean is, hands down, my favorite historical romance author. She always gets me so sucked into her stories and makes my emotions go haywire. I’m obsessed with her Rules of Scoundrels series, so when I heard she was writing a spinoff, I couldn’t wait to get my hands on it! The Rogue Not Taken is the first book in the new Scandals & Scoundrel series, and it was pure fun to read. It had a little Gossip Girl to it, a fantastic road trip, and hilarious, witty banter between the main characters. I didn’t love it quite as much as my favorites from the Rules of Scoundrels series, but if you’re a fan of Sarah MacLean, you still won’t want to miss this new series!

We first met Sophie Talbot in Never Judge a Lady by Her Cover, and even though I wasn’t a fan of her then, I’m a huge fan of her now. I really loved Sophie’s character. She’s funny, sarcastic, protective of her family, and she hates the way society treats her family with scorn. Sophie is the ‘uninteresting’ one of her sisters, but when she creates a scandal that shocks even her siblings, she decides to leave London and most importantly, Society. But along the way, she comes across the Marquess of Eversley, an infamous scoundrel she can’t help but dislike on sight.

He was everything he was purported to be. Scandalous. Sinful. An utter scoundrel. Everything Society vilified, even as it celebrated it.

King, also known as the Marquess of Eversley, has built his reputation as a scoundrel for a reason. So he shouldn’t be bothered that Sophie doesn’t like him based on his scoundrel ways, but for some reason he is. As the two of them are flung along on an adventure across England, they go head-to-head in the most entertaining, delightful of ways. To say the two of them don’t get along is an understatement – the first half of the book is filled with hilarious banter, and witty remarks are constantly exchanged. But what I loved most about their banter was that it allowed King to see Sophie as more than the ‘boring’ Talbot sister. The two of them slowly start to fall for each other during their little adventure, but King proves stubborn and won’t allow himself to ever be vulnerable again.

She thought too little of herself, and King had suddenly wished very much to change her mind. As insane as that sounded.
He blamed her beautiful smile.

The second half of this book is a lot more emotional than the first, and Sarah MacLean had my heart aching and pounding for her characters. And as usual, she writes some HOT scenes in The Rogue Not Taken – the chemistry between King and Sophie is on fire. The build-up of the steam between them is fantastic, but I really wish we could’ve gotten more than the one sex scene there was.

I really enjoyed The Rogue Not Taken – I loved Sophie, but King took me a while to warm up to. He was too stubborn sometimes and I wanted to shake him when he grew frustrating, but the ending definitely made up for it. This was a great series starter, and now I can’t wait to see what Sarah MacLean has in store for the rest of the series!

Now here’s an excerpt from The Rogue Not Taken! ❤

“If you want a bath, you’ll have to accept my help,” he said.

She pursed her lips at that, her gaze settling longingly on the steaming bath. “You mustn’t look.”

“I wouldn’t dream of it.” It might have been the most obvious lie he’d ever told.

Somehow, she believed it, nodding and throwing back the coverlet to step out of the bed. She came to her feet, the top of her head at his chin, and he resisted the urge to help her across the room. “How do you feel?” he asked, hearing the gravel in his words. He cleared his throat.

“As though I’ve been shot, I’d imagine.”

He raised a brow. “Clever. There’s food when you’ve bathed.” The words summoned a low growl from her, and her hands flew to her stomach. Her cheeks turned red, and he smiled. “I take it you are hungry.”

“Food after the bath. And then sleep.”

“What with you being called King.”

She moved past him to the high copper bathtub. He resumed his place against the wall, arms crossed, watching her carefully as she reached down, her long fingers trailing in the hot water as she sighed her anticipation. The sound was like gunfire in the room—pure, unadulterated pleasure. It was delicious.

King stiffened. He was not interested in the lady’s pleasure.

If only someone would tell his body that. 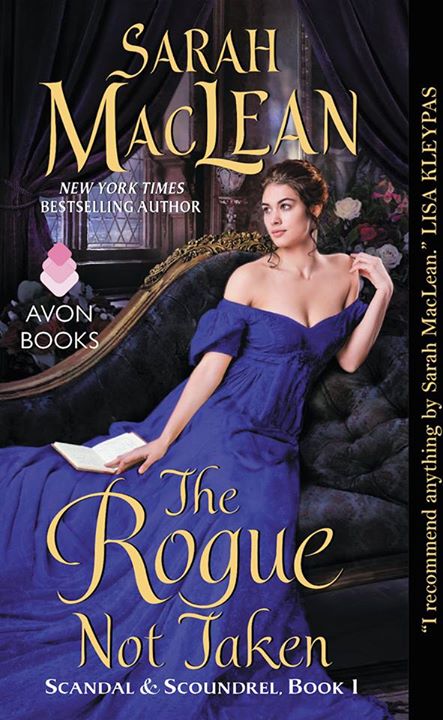 a Set of the Print editions of all books in the Rule of Scoundrels series
(A ROGUE BY ANY OTHER NAME, ONE GOOD EARL DESERVES A LOVER, NO GOOD DUKE GOES UNPUNISHED, and NEVER JUDGE A LADY BY HER COVER)
*U.S. ONLY

4 thoughts on “Blog Tour + Review & Giveaway: The Rogue Not Taken by Sarah MacLean”